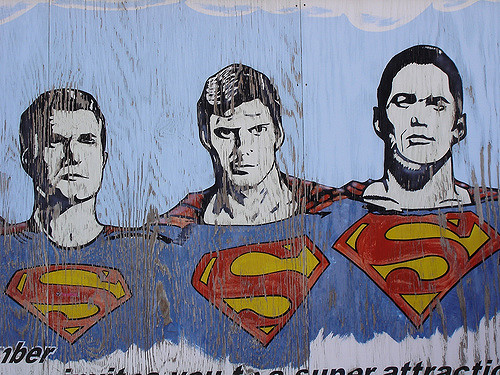 It really doesn’t matter whether you remember Superman as the black and white TV version, Christopher Reeve, or even this new guy from Man of Steele whose name I am truthfully too lazy to even look up. However, Superman is a timeless figure in American culture of strength, honor, and laser beam eyes. Yet, I always wondered, “Why didn’t he have kids?”

Clearly he was getting it on with Lois Lane!

Perhaps the biology of two different species made it impossible, but don’t be sad for Superman. While he may not have had kids, Superman lives on as a fatherly figure in the hearts of us all. When we think about our Dads on Father’s Day (and other days), there is strong analogy to be made between dad and Superman.

Fathers do it all with strength, honor … though often just a little more profanity than Superman. Seriously, go back and watch all the Superman movies again. Not a single curse word from the guy! Like, not even when he was drunk Superman in Superman III! But in the minds of their children, dads do it all with strength and honor. When you were young and the world felt unsafe, you ran to dad because there is no evil that Superman can’t handle.

Probably not true, but as kids we kind of felt that way. We remember dad picking us up, throwing us in the air, and he seemed like the strongest person on the planet. Whatever was broke, he could fix (thoug if you were around when he was trying to fix it, well, that might be where the profanity came in). When you crossed the line, dad would give you that look. And with my dad, that look might as well have lasers coming out of his eyes. If you’re lucky, your Dad has always been your Superman.

Unlike both the Star Trek and Star Wars series, there is not a single Superman movie about an aging Superman. In our minds, it might look completely out of place if there were. Thus, with our dads, it almost feels unbelievable and rather unsteadying to see them age.

It is a hard thing to watch the man who used to seemingly throw you a mile up the air now need help getting out of his chair. Were you to jump into his arms today like you did as a child, you would be paying a medical bill for a broken hip rather that feeling safe.

You may feel like some of the changes in Dad are hard to watch. And sadly, in my line of work, I too often see that this denial is a reason people fail to prepare and plan. They simply refuse to believe that Superman may need their help in his final years.

So here’s my free legal advice. Suck it up. Your Dad probably does need your help.

For Pete’s sake the man has been taking care of you and shielding you from kryptonite his entire life. Sooner or later, all that kryptonite will wear the poor guy out. Blasphemy you say? Well, I don’t like it either. But your Superman probably needs you more than ever. Don’t wait to start talking to Dad about tough decisions as he ages and don’t assume Superman will always be there tomorrow.

Just because Dad doesn’t look the same as he did, and just because he no longer has super strength, doesn’t mean he’s not the same Superman you’ve always known. This Father’s Day, go ahead and keep looking at your Dad as the Man of Steele. But make sure you also see him for the man he is — a man that might need a little help nowadays, but who has earned his cape more times than you can possibly tally. Happy Father’s Day to all the Supermen of the world.

Joe Henderson is founder of Estate Map, which happens to be a handy tool to help dad plan. He is an experienced estate attorney, honored among his peers as a Super Lawyer; rated “AV-preeminent” with Martindale-Hubbell, and rated “superb” with AVVO. Joe’s almost-83-year-old-dad is the oldest active Estate Map user that Joe knows personally. But he’s not actually the oldest Estate Map user.